Parkinson’s is a very difficult thing to deal with and it’s a progressive disease that often gets worse over time. Besides medication and physical therapy, there is one other thing that is guaranteed to help your body endure the symptoms and that is exercise.

It’s understandably scary to try anything that involves complicated movements – and we’re not going to ask you to perform advanced lateral movement immediately, it’s something you have to build up to. In a way, being able to do the advanced exercises is sort of a reward in and of itself.

So we’ll start with some simple stuff before we get to the advanced parts. These exercises were taken from another article of ours regarding plyometric exercises for beginners. We’ve picked some that are simple enough for people with Parkinson’s to do but also effective in increasing mobility.

Like we always recommend before starting any exercise, you must do some warm-ups. Wake your blood up with a few rhythmic movements. Stretch your limbs and get them ready to do some running. 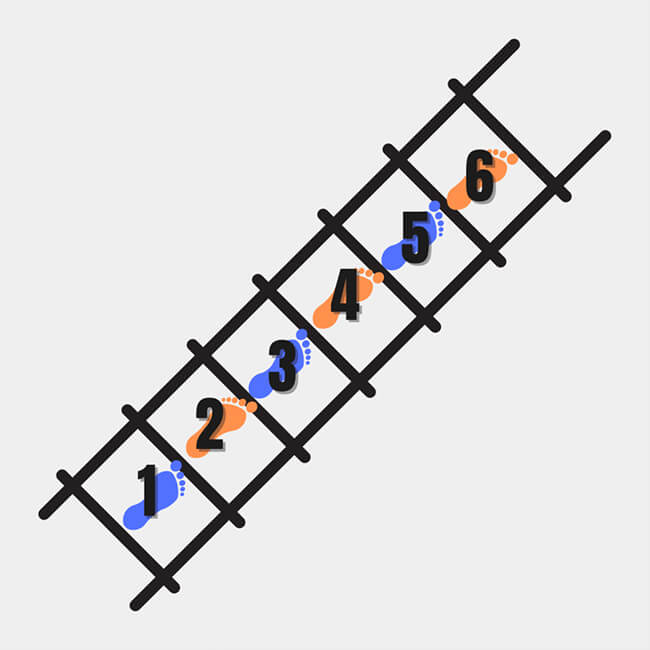 This is sort of like a warm-up – and if you’re able to get this right a few times, you should be ready for the other exercises then too.

Doing good so far? Great – this is just the beginning! 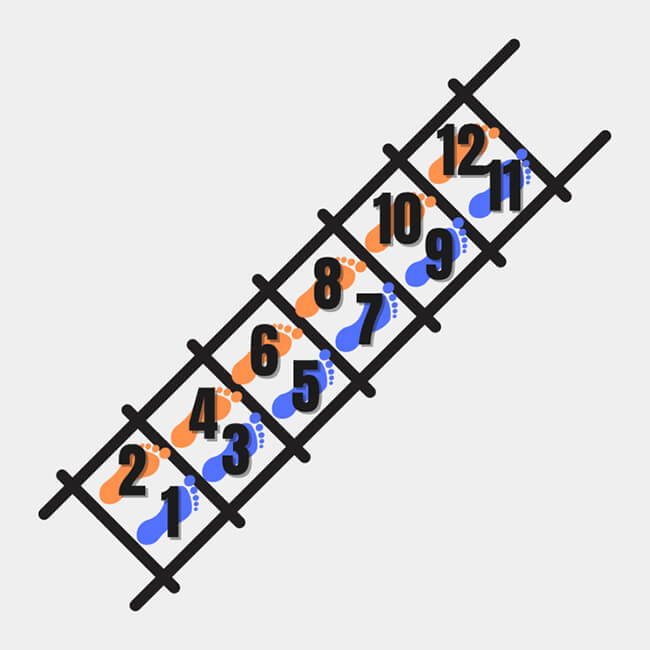 Go through the ladder once with this technique and go back to the starting point and do another repetition. This is similar to the first exercise, only slightly more difficult. The challenge is in doing this exercise quickly – but always remember to start slowly at first especially if it’s your first time going through the exercise routine. 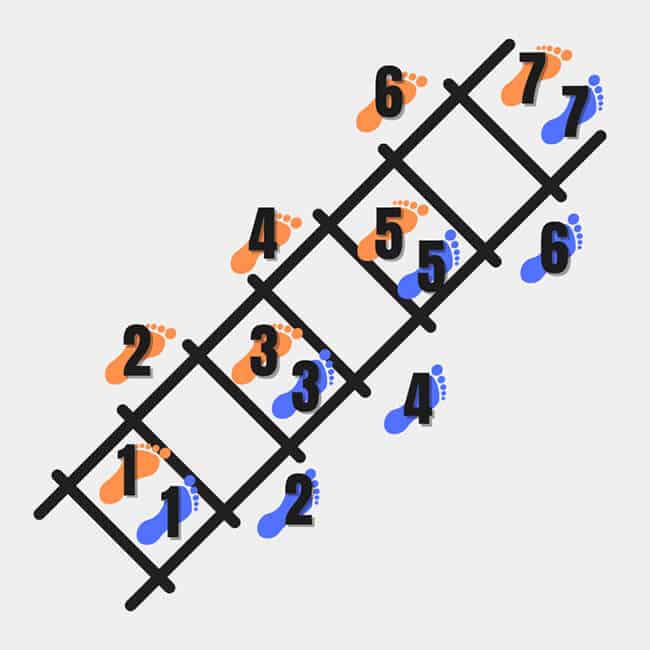 Basically, you’re going to be doing jumping jacks while going through the ladder until the endpoint.

There are more exercises that you can do with a plyometric ladder, and I really do suggest that you check that article out by us if you think you’re ready for more complicated footwork. 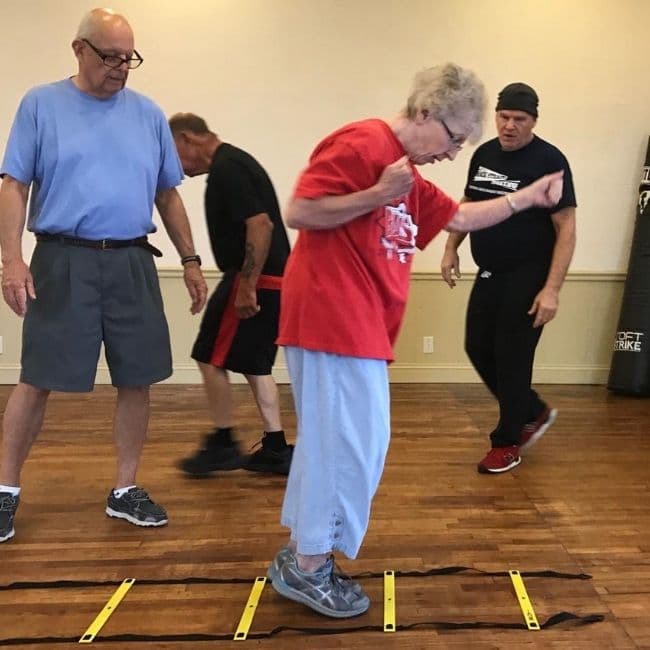 The thing about Parkinson’s is that it targets the patient’s ability to be efficiently mobile – specifically, it targets their body’s muscular strength, it messes up the patient’s balance, and drastically reduces flexibility. The disease attacks these areas and it can sometimes cause people to fall suddenly or find it hard to traverse areas without some sort of difficulty. It takes a lot from a person, but the beauty of humanity is that we are free to fight back whatever it is that tries to bring us down – we’re rebellious, and that’s the kind of person you have to be to fight this disease. Here are the benefits of exercising for people with Parkinson’s:

1. Exercising Will Benefit Your Emotional Well-being And Psychological Health

That’s right. Whenever you take a step in that plyometric ladder – you’re telling your body that you’re in control. You’re the boss, and it can try to stop you – but you won’t give up trying to fight it. You’ll feel joy as you begin to grab your life by the reins and steer yourself – but that’s not only a made-up feeling, it’s an actual chemical reaction in the brain. The happy feeling that people get when exercising is not merely some idea made up in your mind – it’s your brain reacting to your body, telling you that you’re doing the right thing by giving you endorphins and all that good stuff. It gives you internal strength as well as external, helping you to become able to keep fighting and keep trying.

Besides, it’s not uncommon that people who suffer from Parkinson’s disease have some psychological comorbidity, like anxiety or depression. So if you or someone you know is suffering from depression due to Parkinson’s disease, first of all, please seek professional help – it might be hard but I promise it will be worth the effort and second, exercise, as mentioned in this article for people who suffer Parkinson’s disease as among one of the things that will help.
On that note, it’s also worth knowing that the best kinds of exercises that are good for fighting both depression and Parkinson’s are either Aerobic, like yoga and tai-chi or Rhythmic – like walking, jogging, or doing agility training on a plyometric ladder.

2. Exercising Will Slow Down The Parkinson’s Disease’s Progression

It does so in two ways, first of all – it counteracts the effects of the parts in the body the disease attacks. That is if it’s done right – if the right exercises are used. Although we recommend agility training on a ladder since it will improve balance and mobility, it’ll be so much better to go for a check-up with a physical therapist and ask them what exercise they can recommend to you specifically. That way, it’s more personalized. Anyway, the second way it helps is by strengthening the body – helping your reflexes get quicker and your muscles to be more capable at handling simple stuff at first, then gradually ramping it up to more complicated movements over time. Dedicating yourself to an exercise regimen will make your life easier both in the present and in the long run. However, the thing about exercising to reduce the severity of Parkinson’s disease symptoms that it’s found that you need to be absolutely dedicated and committed to the exercise – you can’t afford to pause exercising for too long because the benefits will be lost, the person’s body will most likely return to pre-regimen conditions within a year without exercise.

3. Exercising Will Result To A Lot of Comfort And More Control Afterwards

Whatever the disease they suffer from, people are always better off exercising – and it’s especially the case for people who suffer from Parkinson’s disease. Since exercising results in more control of their body, it would not only be greatly beneficial for them – but also it will keep them safe from danger. Since one of the symptoms of Parkinson’s is the loss of balance resulting in the person falling. With regular aerobic exercise, it is possible to reduce the severity of falls or to outright be able to live without it as long as you can exercise. Having more control over your body means that you’ll also be able to be comfortable, or less anxious about getting into accidents that are caused by symptoms related to the disease.